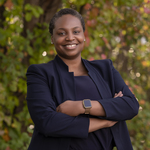 Lonnesse Williams is a native of Stillwater, Oklahoma but has called South Carolina home for the past fourteen years. Prior to moving to Columbia, South Carolina, Lonnesse lived in Ft. Lewis, Washington, as her father is an Army veteran. Lonnesse has had the opportunity to travel and live in various states and cities to include Oklahoma, Texas, Washington, Georgia, and Florida. In 2005, she graduated from Spring Valley High School in Columbia, South Carolina and went on to attend the University of South Carolina. While at the University of South Carolina, she became a member of Alpha Kappa Alpha Sorority, Incorporated and has since been a member for the last eleven years. She earned her Bachelor's Degree in Political Science, graduating cum laude. Lonnesse attended Florida Coastal School of Law in Jacksonville, Florida. During her time at Florida Coastal School of Law, she participated on the Mock Trial Team, was involved in the Black Law Students Association where she served as a student mentor, and was a Guardian ad Litem for the Fourth Judicial Circuit in Jacksonville, Florida.

Lonnesse visited the University of South Carolina School of Law during her last semester of law school. During her studies at the University of South Carolina School of Law, she successfully completed a judicial externship for the former Chief Judge of the South Carolina Court of Appeals, the Honorable John C. Few. She went on to graduate from Florida Coastal School of Law with pro bono honors. Before beginning her practice, Lonnesse had the honor of clerking for the Honorable DeAndrea G. Benjamin, South Carolina Fifth Judicial Circuit Court. Lonnesse has extensive experience practicing in the civil courts and administrative tribunals of South Carolina and in federal court, as she has dealt with landlord-tenant issues, probate matters, property disputes, FEMA disaster relief assistance, Social Security Administration cessation and overpayment concerns, and family law conflicts. Most recently, Lonnesse's area of emphasis has been employment litigation to include Title VII discrimination and retaliation, race discrimination, contractual issues, and Family Medical Leave Act disputes.

Thank you for contacting us. We will get back to you shortly.

Please complete all required fields below.